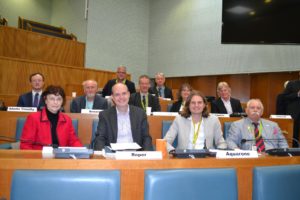 At the first meeting of the new County Council, the ruling Conservative group gave us a glimpse of the future when one party has all the power. Here is the text of a letter I wrote to the EDP ahead of the meeting:

Norfolk Conservatives have shown us a glimpse of the future.

The County Council meets on Monday with its newly installed large Conservative majority. The first item added to the agenda is a move to reduce the size of committees at County Hall.

You might think that is no bad thing – no one likes committees. But the truth is these committees – of councillors elected to represent and speak for local people – provide vital oversight of the ruling group’s plans. They were strengthened by councillors when the Conservatives had no majority at County Hall. Now they are back in charge with unfettered power, their first act is to reduce the ability of the opposition to do its job.

Bad decisions get made when one group has the power to act without being challenged. It’s worth thinking about that ahead of the election on June 8th.